Nowhere Else: South Carolina and the Legacy of Scientific Racism 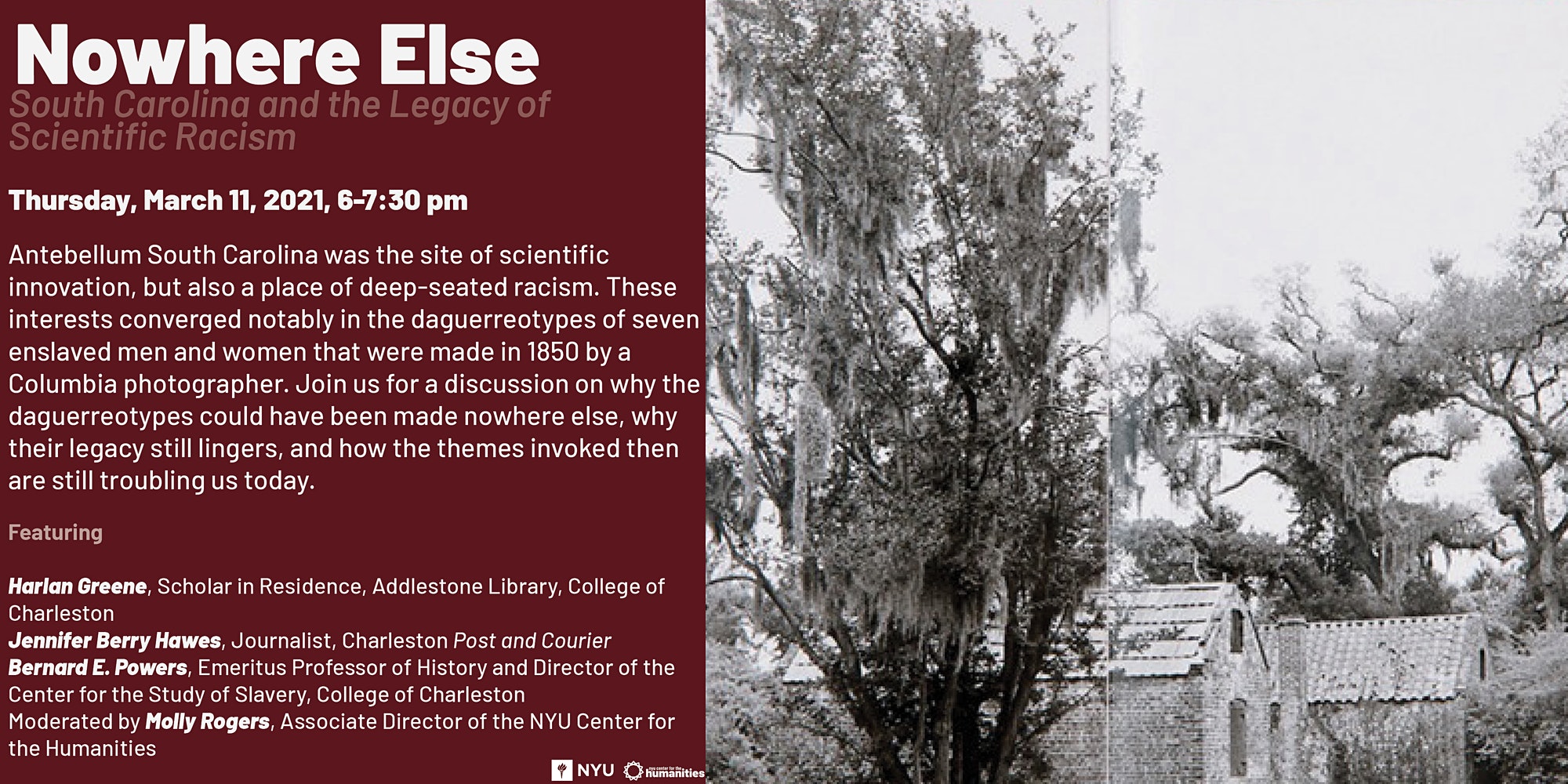 Antebellum South Carolina was the site of scientific innovation, but also a place of deep-seated racism. These interests converged notably in the daguerreotypes of seven enslaved men and women that were made in 1850 by a Columbia photographer. Join us for a discussion on why the daguerreotypes could have been made nowhere else, why their legacy still lingers, and how the themes invoked then are still troubling us today.

Harlan Greene is Scholar in Residence at Addlestone Library, College of Charleston, where he previously served as head of special collections, and as manager of reference and archival services at the college’s Avery Research Center for African American History and Culture. He is also a prize-winning novelist and the author of numerous books and articles on the culture and history of the South Carolina low country, including Mr. Skylark: John Bennett and the Charleston Renaissance (2001), and Slave Badges and and the Slave Hire System of Charleston, South Carolina, 1783-1865 (with Harry S. Hutchins, Jr., and Brian E. Hutchins; 2003).

Jennifer Berry Hawes is a reporter on The Post and Courier’s Watchdog and Public Service team, which handles investigative and other in-depth stories. She worked on the team that won the Pulitzer Prize for Public Service in 2015 and was a Pulitzer finalist in Feature Writing in 2019. Her book Grace Will Lead Us Home, about the Emanuel AME Church shooting, was published in 2019 by St. Martin’s Press. It has won numerous national awards and was named a New York Times Notable Book of 2019.

Dr. Bernard E. Powers is emeritus professor of history at the College of Charleston and director of its Center for the Study of Slavery in Charleston. His Black Charlestonians: A Social History 1822-1885, (1994) was designated an “Outstanding Academic Book” by Choice Magazine. He co-authored We Are Charleston: Tragedy and Triumph at Mother Emanuel, (2016) which contextualizes the city’s 2015 racially motivated murders. His most recent book is 101 African Americans Who Shaped South Carolina (U.S.C. Press, 2020). Dr. Powers is also the interim C.E.O. of Charleston’s International African American Museum.

Moderated by Molly Rogers, Associate Director of the NYU Center for the Humanities

The Center for the Humanities is committed to making our events as accessible as possible to everyone, including (but not limited to) those with visual and hearing impairments. We’re constantly working towards improving the accessibility of our events to ensure we provide equal access to all of our users. For disability accommodations please contact us at humanities.center@nyu.edu as soon as possible. Advance notice is necessary to arrange for some accessibility needs.