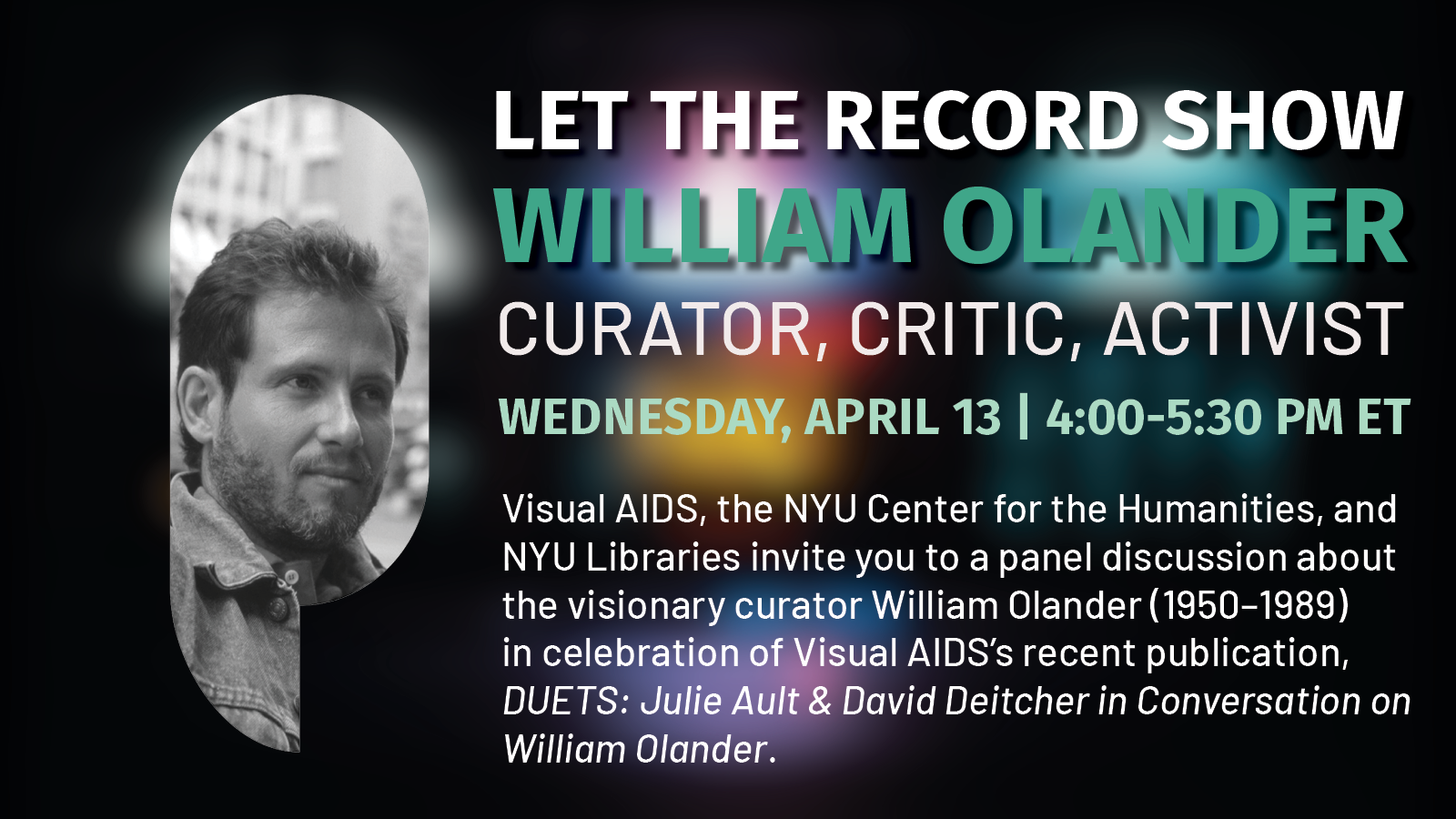 Visual AIDS, the NYU Center for the Humanities, and NYU Libraries invite you to a discussion about the visionary curator William Olander

Julie Ault is an artist, curator, and writer who often adopts curatorial and editorial modes as an artistic practice. Her work takes the form of exhibition-making, art writing, and historical chron- icles. In 1979 Ault cofounded Group Material, a New York–based collaborative, active until 1996. Ault’s recent work focuses on researching and mobilizing materials and information to animate histories of activism in art.

Susan E. Cahan is an art historian, educator, and curator who specializes in contemporary art and the history of museums. Her writings focus on the relationships between artists, institutions, and social change and are informed by both theoretical research and practical experience working in museums and in private collecting and philanthropy.

David Deitcher is a writer, art historian, and critic living in New York City. His essays have appeared in Artforum, Art in America, Parkett, Village Voice, and other periodicals, as well as in numerous anthologies and monographs on artists such as Sherrie Levine, Felix Gonzalez-Torres, Isaac Julien, and Wolfgang Tillmans.

Hugh Ryan is a writer and curator. His first book, When Brooklyn Was Queer, won a 2020 New York City Book Award, was a New York Times Editors’ Choice in 2019, and was a finalist for the Randy Shilts and Lambda Literary Awards. For his 2019 exhibit “On the (Queer) Waterfront,” he was honored with the 2020 Allan Berube Prize from the American Historical Association. Most recently, he was a scholar and lead author on “Hidden Voices: LGBTQ+ Stories in U.S. History ” curricular materials for the NYC Department of Education.

Susan Siegfried met William Olander when they were both graduate students in Paris conducting research on their doctoral dissertations in the late 1970s. They were working on overlapping areas of French art and visual culture of the Revolutionary and Napoleonic periods at a time when understandings of it were undergoing radical change, offering a basis for a broader rethinking of art as a medium of social and political engagement.

Bruce Yonemoto has developed a body of work which positions itself within the overlapping intersections of art and the cinema screen. He believes that the composition of mass media has become the historical site of the domination of human behavior. Yonemoto has been honored with numerous awards and grants from the National Endowment for the Arts, the American Film Institute, and the Maya Deren Award for Experimental Film and Video

DUETS: Julie Ault & David Deitcher in Conversation on William Olander is available for $10 through the Visual AIDS website.